As Kyla alluded to in Part 1, not all cases of “overtraining” are the same, and the misuse of terminology does a disservice to the few athletes who are experiencing the worst end of the overtraining spectrum. Further, there is still confusion among researchers about overtraining definitions, as some scientific literature on “overtraining syndrome” is clearly describing the more benign “overreaching”. There is also uncertainty on how overtraining may overlap with energy deficiency. That said, I will do my best to clarify where the research stands to date.

To begin, we all know that a certain amount of overload training is required in order to adapt to the training and come back stronger. As you increase your training load, often termed “overtraining” or “overload training”, you should experience normal training fatigue which we call acute fatigue. Acute fatigue should last a day or two upon recovery (i.e. you take a day or two off or only do easy activity, and the fatigue resolves), and then you should have a micro-adaptation or supercompensation, which means you are now a tiny bit fitter, stronger, or faster.

Now let’s say you are at a training camp, or in a particularly hard block of training, and you do not take a day or two off when you are fatigued. That may result in functional overreaching, which is different from acute fatigue because you have a decrease in performance. This means that even if someone held a gun to your head, you could not hold your typical times/paces/watts in training or in a race. Functional overreaching also comes with a host of other physiological symptoms that I will describe below.

Functional overreaching takes about a week or two of zero-to-easy training to recover from, but should resolve completely. If you take appropriate recovery, you may have a supercompensation, or you may just return to your baseline level of performance (1–5). In this way, acute fatigue is actually better than functional overreaching in terms of improving performance in the long run. 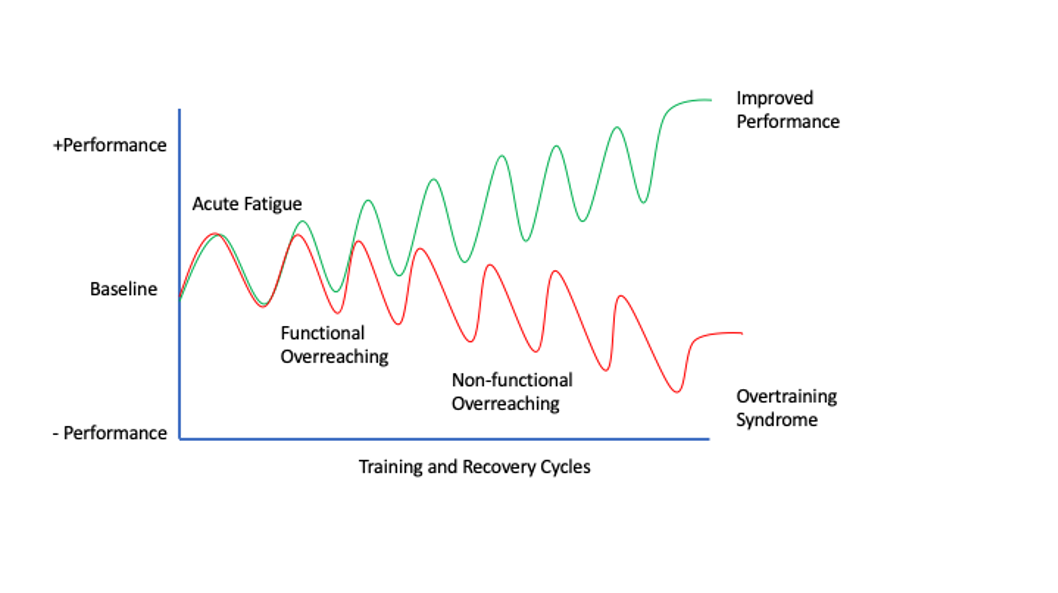 Lastly there is Overtraining Syndrome (OTS). The literature suggests that overtraining syndrome may not be fully on the spectrum, as it likely requires some additional stressor in addition to the training for the syndrome to occur (7). The triggers are non-specific, but often there is a triggering virus, or perhaps excessive altitude or heat training, that may predispose the athlete towards developing OTS. The reason it is believed that OTS may require additional factors is simply because most athletes will have experienced some form of overreaching, but only a very small percent of athletes ever develop true OTS. The definition of OTS is the “prolonged maladaptation of not only the athlete, but several biological, neurochemical and hormonal regulation mechanisms”(7), and requires the exclusion of any other disease, nutrient deficiency, or other major disorders(7). The literature suggests that it takes months to years to recover from OTS and often spells the end of the athletes career (7). In my experience dealing with a handful of athletes I believe developed true OTS (including my sister), none have been able to make a come-back to competitive sport. As they seem to be particularly sensitive to training and life stress for many many years afterwards, I would be surprised if anyone could fully return to elite sport following a diagnosis of OTS. 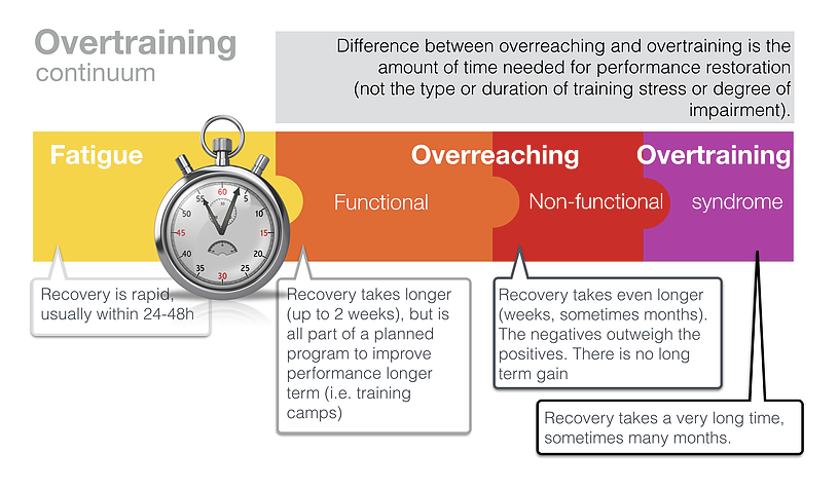 Relative Energy Deficiency in Sport (RED-S) is not on the Overtraining Spectrum, but does share a number of common symptoms to overreaching. RED-S (8) is a progression of the Female Athlete Triad(9), which is the understanding that insufficient energy availability (i.e. not enough calories eaten compared to those expended) leads to a decrease in estrogen which disrupts the menstrual cycle, and which causes low bone mineral density leading to stress fractures (9). RED-S builds upon this model by suggesting that low energy availability can cause a host of other physiological dysfunctions, and is not restricted to only women. Where RED-S may overlap with overreaching is that it is very difficult to assess calories in vs. calories out with accuracy, and athletes may be training so hard that they are inadvertently in a state of low-energy availability because there simply isn’t enough time in the day to get the calories in. Further, research hasn’t been able to conclusively show that overreached athletes aren’t underperforming simply because of an energy deficiency. However, I do personally believe that athletes can get to a state of overreaching without energy deficiency, simply because while RED-S can be detected with some standard blood tests, overreaching and overtraining syndrome rarely are detected with blood markers (10). As such, while there is without a doubt some overlap between RED-S and overtraining, which I call ROVERTRAINING, I do think there are also some differences, which we will see in the symptoms section below.

“ALEX, HOW DO I KNOW WHICH STAGE I AM IN?” Do not despair, I will explain. To begin, mood states follow an inverse linear trend with training load, so as your training load goes up, you will get more and more grumpy/anxious/irritable/depressed/emotionally volatile. Acute fatigue should feel like normal irritable and tired training fatigue, whereas overreaching should feel like you are in a “dark hole” for lack of better words. You will be very emotionally unstable, and in training it will feel like you can’t push yourself even when you want to. This is because overreaching is characterized by a decrease in heart rate at every level of intensity (not just at max), and a decrease in lactic acid production (1,11) – so you will not be able to sprint. In my own research, I found that functionally overreached athletes had increased sympathetic nerve activity, reduced maximal cardiac outputs, and increased arterial stiffness (3,4). While you will not be able to detect that yourself, you should be able to recognize that you are underperforming in training, and that training feels much harder than it should. If you are good at heart rate measures, your heart rate will recover faster following a given effort. Waking heart rate variability may be higher or lower with overreaching, but will likely be different from your baseline (5). At this point, you need to take a week to a few months off, and you should fully recover. There isn’t a resting blood marker to date that accurately predicts overreaching independent of RED-S, but where blood markers will be present in low-energy availability within days-to-weeks, there are often no significant disturbances to blood work with overreaching. 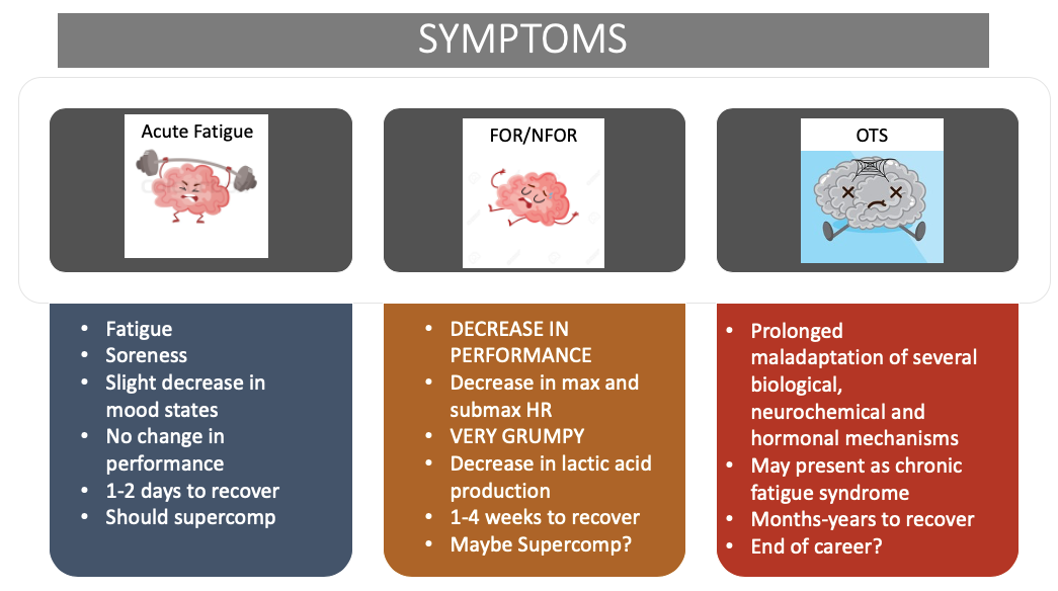 Figure 3. Symptoms of AF, OR, and OTS

Overtraining Syndrome symptoms are harder to pinpoint, because due to the maladaptation of several physiological axes, there is a whole variety of symptoms individual to the athlete (7). Further, as I mentioned previously, the research does not seem to capture the athlete experience. That said, the defining features include exercise intolerance and post-exertional malaise. These symptoms will present as extreme exhaustion, to the point where a walk or a bike-commute to work leaves athletes incapacitated. They report deep muscle and joint pain following even easy exercise, and strange disturbances to heart rate. Often these heart rate disturbances present as highly elevated heart rates during easy exercise, and potentially suppressed heart rate during hard exercise. Sleeping disturbances seem to be common such that after a stressful day or light exercise, they have a racing-heart and anxiety that does not allow them to sleep, or they can’t stop sleeping. They also report extreme brain fog, difficulty concentrating, anxiety, and depression. There are many more symptoms that likely represent the individual imbalances, however blood tests usually come back fine (10). Altogether, these symptoms line up with the diagnostic criteria for chronic fatigue syndrome (CFS) which is a syndrome of exercise intolerance. The primary criteria for a chronic fatigue syndrome diagnosis is post-exertional neuroimmune exhaustion with additional symptoms of neurological impairment (sleep, pain, motor or cognition), energy regulation (cardiovascular, respiratory or thermoregulatory), as well as additional symptoms such as gastrointestinal issues or immune responses (12). Like OTS it is often sudden onset and triggered by a stressor. Given that research in the field of CFS is more robust than that of OTS, and that there is better awareness in CFS of the harms associated with continuing to exercise, it could be beneficial to think of OTS as “training-induced CFS”. 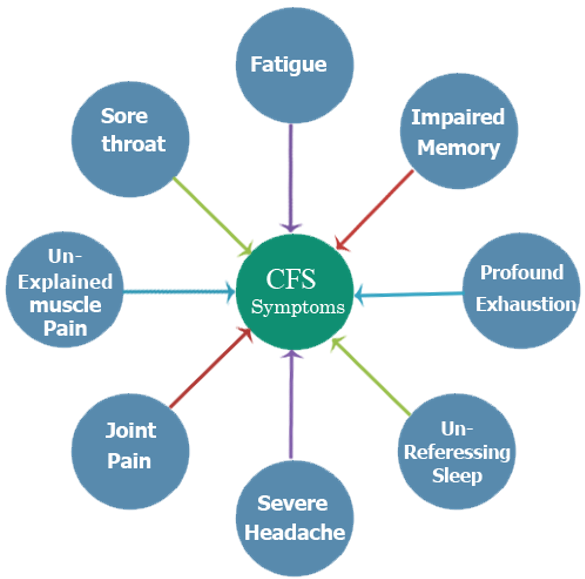 Finally, RED-S is the easiest to diagnose as we have some clear symptoms and blood markers. The earliest marker of RED-S is a suppression of resting metabolic rate, which means athletes with RED-S often gain weight rather than lose it, despite taking in less calories than they expend. There will be reductions to blood pressure and resting heart rate. In a standard blood test, you will see a combination of red flags such as low estrogen, testosterone, luteinizing hormone, follicle-stimulating hormone, T3, IGF-1, serum ferritin, leptin, growth hormone, fasting blood glucose and insulin, and increased LDL cholesterol and cortisol (9,13–15). Finally, after a long period of RED-S, athletes will have reduced bone mineral density which will likely result in stress reactions or stress fractures (8). 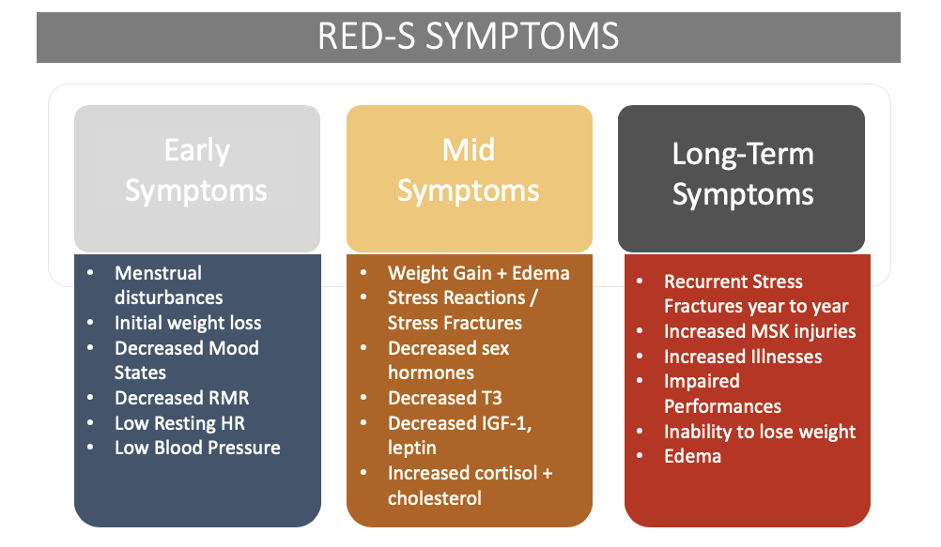 Altogether, I believe that while the research is certainly far from complete in these fields, some clear categories and understanding of the terminology is very important for the athletes, coaches, and practitioners. Not only will this assist with diagnosis and recovery, but it will help with future research directions.

If you’ve made it this far, thanks for reading! Return for part 3 where Kyla will tell her personal experience with overtraining syndrome.