The funny thing is those two and a half months feel like a lifetime. A lot has happened in 2.5 months! But let’s go back (seeing as it’s been over a year since my last blog post, and because this may be my last blog post EVER). Let’s go back to when I was a kid in swim club, participating in local triathlon races in the summer. Or maybe to high school, when we sometimes did ten swim workouts in a week, and my coach taught me to smile off every wall even when I was crying. Or when Kyla and I were 17, and we moved out to Victoria to train with the National Triathlon Center. Maybe back to when results started coming together, and all of our efforts were rewarded by making National Development teams and travelling around the world! And finally to when I chose to move to Guelph to train with Craig Taylor and the amazing crew of athletes out here. All of these life moments, from the time I was 5 years old until two and a half months ago, revolved around competitive sport. When was the last time you took 2 days out of the water? Up until 2.5 months ago I could say it was a very rare thing if I took 2 days in a row out of the water. Including at Christmas. And now here I am, going on two and a half months. Let me say that again… I’ve never stopped thinking about training in my entire life. MY entire life!!!

Now you must all be anxiously wondering what led to the “crack”. Let me elucidate.

In the spring of last year I received word that I had been awarded a CIHR master’s award for the fall of 2015. I came to the realization that I would be a fool to pass it up, and therefore despite knowing it was an Olympic year, and that I was finally seeing the results I knew I was capable of under Craig, I would be going to school in the fall. I was very excited about doing my Masters, but also knew that pursuing a full time graduate degree was not going to be the same as a part time undergraduate degree, and that I would likely be finishing my triathlon career. I tearfully called Craig and told him that this was likely my last year. He understood, and we decided to still have a killer final season.

Then I proceeded to have a decently killer final season. 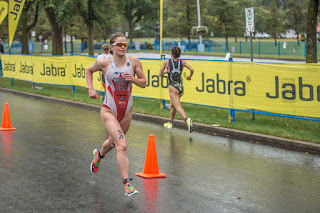 When it came time to say goodbye, I couldn’t do it. I decided: NOPE. Imma do both. I’ll train. I’ll learn. I'll continue to coach.  Luckily my supervisor is awesome, and he was supportive of me giving the Olympic-year a shot, as long I didn’t forget about school.

The fall started out great. I was insanely busy, but still hitting my sessions, and doing all of my work. I distinctly remember thinking “Wow. Considering how impossible this schedule is, I’m doing great!” I also remember thinking, “I wonder how long until I crack?”

The winter was my decline. The chaotic energy that I had maintained in the fall started to fade. My routine sometimes looked like “swim, run to school, run to weights, run to school, go to biking, go back to school, come home, answer emails and do some coaching, go to bed. Repeat.” Thursdays were designated melt-down days. I think the only people who could semi-comprehend the struggle were my lab mates, who watched me running in and out, and who witnessed my mood swings. 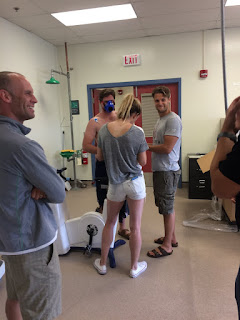 Despite that, I managed to have an unexpectedly good race in Cuba in February, and then okay results in Florida, with my career best swim happening in Sarasota. So I did get in a couple of nice triathlon moments this year. My plan was to race Gold Coast WTS, Yokohama WTS, FISU in Switzerland, Edmonton WTS, and then my first elite world championships in Cozumel. Unfortunately I wasn’t able to race any of those races, and my achilles flared back up when I pushed through a bout of pretty extreme fatigue, and so here I am today, still not running, and also having raced none of those races (let that be a lesson to you). 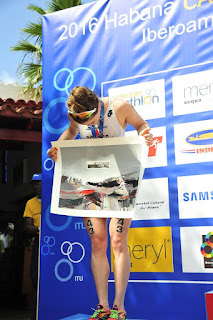 But back to the breaking point. It happened quite unobtrusively. It was a Tuesday. Our morning swim workout was something like 30x100 on 1:35 as 5 hard, 5 tempo, 4 hard, 4 tempo, 3 hard, 3 tempo, 2 hard, 2 tempo, 1 hard, 1 tempo. I felt fine in warm-up, and my brain was in the game, but I had been feeling the cracks forming for a couple months. I hadn’t really been performing in workouts for a while. The set started, and I knew instantly it wasn’t going to be pretty. It was one of those full-body-pain, swimming through mud, bad-dream, type of workouts. If I had been smart, I would have stopped. I am doing a degree in overreaching, so I do know what the symptoms are. However the frustration and accumulation of months of this got to me, and I became quite angry. There was no smiling off of the walls despite the tears. My times were abysmal, but I was still going hard on the hard, and tempo on the tempo. The start of every hard 100 I asked myself, “What the hell are you doing Alex?” and myself replied “I. Will. Never. Quit.” And at one point the thought came to me that “This is my last swim workout ever” and I didn’t stop.

Ironically (And this is the nature of triathlon. No one will ever know the internal battles you go through during a race or in a workout) my coach didn’t really notice how bad my workout was. Afterwards I walked off the deck, didn't say anything, body uncontrollably shaking, with tears on and off, and (as is my nature) I went to the gym for our strength workout.

The rest of the day was definitely a disaster. I shook, continued to cry on and off (not from sadness, but from extreme fatigue), and could barely put a thought together. I missed Tuesday night Hammerfest, and talked to my sister on the phone, and realized I couldn’t keep doing this. I was no longer able to get faster. I wasn’t even running again due to the achilles! Something had to give. In respect for my future goals in academia, it was sport. The next morning I waltzed into the lab, with a cheerful “Morning guys! This is the first day of my new life!!” Everyone concluded I was clinically bi-polar. 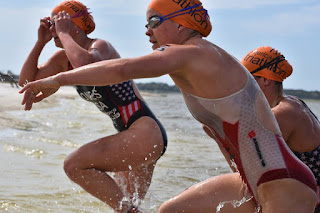 My career best swim in my last race in Sarasota, Florida

Since that fateful Tuesday, I am still coaching with LPC and obviously working on my master’s thesis (which is entitled "The Effects of Functional Overreaching on Cardiovascular and Autonomic Nervous System Function in Endurance Athletes"- I'm still recruiting!). I got my first paper published, which you can read here. It was one of the projects that I worked on for most of the winter while I was still training, so it represents the blood, sweat and tears of this year. My life still feels very busy, but now I have time for myself, and have an hour here or there to read, or to go to yoga with my pals. I’ve been climbing and biking and going to the gym. It’s a little hard living with triathletes and seeing them come home from big sessions. I miss the extreme highs and sense of supreme self-worth from conquering workouts, or excelling at races. On the flip side, this is the first time in my life where I can do what I want, and not feel constantly guilty.  I am learning to let go (very slowly). As Andrew Yorke put it, "As a triathlete every decision that you make directly affects your training. If you have an easy day on a Wednesday, and decide to go to a baseball game in Toronto, you are going to feel that in the water the next morning. That swim then affects the ride later on in the day, and by the end of the week that baseball game took away from half a week of training." I'm not saying triathlon is a huge sacrifice - it isn't a sacrifice, it is a life decision. However unlike any other job, or even most other sports, you are on 24/7. Every little piece adds up when you have 3-4 workouts/day, with 2-3 of them being quality.

I suppose what I am trying to conceptualize is not necessarily how hard triathlon is, it is how all-encompassing it is. I am trying to explain how my decision to focus on my master's this year, and my PhD in the next couple years, is also not a sacrifice. It is a life decision.

Thanks for following along with my triathlon journey on this blog for the last 10 years! And thanks to all of my supporters, sponsors, coaches, athletes, friends, family, teammates and competitors. The journey was one I will never forget, as it formed every aspect of who I am today. Who knows where it will take me from here? 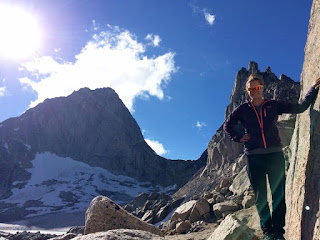 Scrambling in the Bugaboos